UGANDA (eTN) - On the 110th anniversary since the first scientific climb of snow-capped 5109-meter Mt.

UGANDA (eTN) – On the 110th anniversary since the first scientific climb of snow-capped 5109-meter Mt. Rwenzori, also known as “Mountains of the Moon,” Italian Ambassador to Uganda, Domenico Fornara, tweeted on his Twitter page, a reminder to those who quickly forgot about the excitement at the centenary celebrations in 2006.

Located in Western Uganda, the Rwenzori Mountains, a UNESCO (United Nations Educational Scientific and Cultural Organization) World Heritage site, straddles the equator 996 square kilometers along the border between Uganda and the Democratic Republic of Congo. Its equatorial snow peaks include the third highest point in Africa. 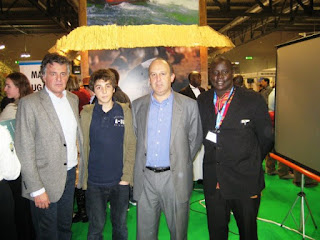 The ambassador had reason to sound the reminder, as ten years ago on the occasion of the centenary, there was much more fanfare to crown the event, including a tourist exhibition at BIT Milan in February 2006 led by yours truly; a photographic exhibition of images taken by Vittorio Sella, the official photographer of the 1906 exhibition; lectures by visiting anthropologists from Italy including Professor Cecelia Pennacini from the University of Turin; and a scientific expedition dubbed “In the footsteps of the Duke” led by descendants of the Duke, scientists, a photographer, and the Alpine Brigade that conducted the first survey. The reigning king, Rukirabasaija Oyo Nyimba Kabamba Iguru Rukidi IV, King Oyo of Toro, also graced the event since his great grandfather had received the Duke then.

900 years earlier, these fabled Mountains of the Moon (Lunae Montes) had been described by Greek geographer, Claudius Ptolemy, the father of geography, in 150 AD as the source of the Nile, prompting the age of exploration and scramble for Africa in the 19th century and probably a world war.

The Bakonzo, a people who had inhabited the area (and still do) had previously held the mountains sacred as the dwelling place of their god, Kitasamba, whose frozen sperm (the snow) it was believed fertilized the land and nourished the people as it melted in rivers and lakes. The Duke’s scientific expedition, as all colonial conquests and influence did, changed this, as indeed evidenced in the naming of the peaks after western names including Margherita (the Queen Mother), Stanley, Speke, Baker, Gessi, and Alexandria.

Fast forward to the 21st century, and the effects of the receding snowcapped mountains attributed to climate change are glaring, as demonstrated by the satellite imagery of the mountains since Sellas’ images more than a century earlier.

The Uganda Wildlife Authority (UWA) website mentions that Rwenzori is rich in endemics, including the Rwenzori Turaco, 1 hawkmoth, 6 butterflies, 19 bird species, and 12 small mammals that occur only here and/or in a few other highlands on either side of the Albertine Rift, including the Rwenzori hyrax and Rwenzori Leopard. Twelve species are on the IUCN Red List of Threatened Animals.

Other animals include the chimpanzee, Rwenzori otter, leopard, blue monkey, and unusual reptiles such as the three-horned chameleon and the forest elephant whose populations are fast declining.

Sadly, according to Richard Taylor, a geology professor at University College London, there won’t be any ice left on the mountain by 2030. The glaciers, which had a combined area of around 2.7 square miles at the start of the 20th century, now occupies less than 0.4 square miles. Taylor estimates that the ice is declining by roughly 0.2 square miles per decade. “Really, you’re looking at a last chance to see,” he says.

Nature, and for sure Kitasamba, seems to be taking revenge on man, for floods as recently as 2014 came down in torrents, along with boulders claiming many lives and property in Kasese, the main town at the foot of the mountains.

CNN recently warned of the “Last chance to see disappearing glaciers.” This is still quite possible, for under the management of UWA, there are several trails to the highest mountain peaks, including the eight-day trek to Magherita operated by the local communities.

Perhaps wishful as it may sound, if the mountains, not excluding forests, rivers, and lakes had been left alone to Kitasamba and his prowess, the glaciers would still have their impressive snow swirl, and we would never have to worry about climate change.

The Duke, however, earned his place in history, for he carried out the first ever scientific expedition on the Rwenzoris, and although the thousand-year-old House of Savoy disappeared, the eponymous glaciers may be a reminder of a once conquering monarchy.

To drive this home, according to Desmon Tsongo, a konzo descendant of the original local guides and for that matter of Kitasamba who spoke on behalf of Rwenzori Mountaineering Services, the grandson of Duke of Abruzzi (yet to be named) is expected to visit Uganda pending confirmation of the Italian Embassy in Kampala.