2016 has been a great year for Sooty Terns on Bird Island, and this year has been one of the best for Bird Island's Sooty Tern colony, with more birds nesting than in the past few years.

2016 has been a great year for Sooty Terns on Bird Island, and this year has been one of the best for Bird Island’s Sooty Tern colony, with more birds nesting than in the past few years. By June, the main part of the colony was packed with birds nesting at high densities – up to six nests per square meter. More birds were still arriving in the month of July and occupying the open plains in the northern part of the island. This point was discussed by Alain St.Ange, the Seychelles Minister responsible for Tourism and Culture, as he spoke to conservation-based journalists at the Top Resa Tourism Trade Fair in Paris. 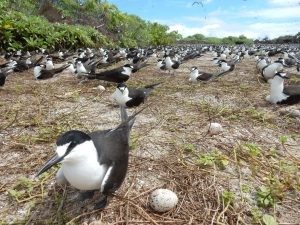 Most years, some parts of the northern plain remained unoccupied, but in 2016, virtually all parts have had nesting birds. The birds have also occupied low vegetation along the crest of the western beach extending south as far as the front of the hotel, making for a spectacular sight!

This year, the birds started laying earlier than they have done for several years, with the first chick of the 2016 breeding season making its appearance on July 4! Observations on Bird Island are showing that Sooty Terns this year are finding plenty of food within easy reach of their nesting sites allowing foraging birds to return to their nests reasonably quick and relieve their incubating partners. Ornithologist, Chris Feare, believes that this and the accompanying good weather have contributed to the large numbers of Sooty Terns this year. 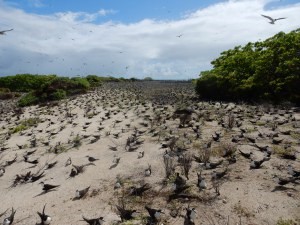 Below is a more detailed article by Mr. Feare on the status of the Sooty Tern colony this year, written while on Bird Island, carrying out his yearly research work.

It is early July, and the main part of the colony is now packed with birds nesting at high densities of up to six nests per square meter. A remarkable sight and the volume of noise is astounding. More birds are continuing to arrive, however, and occupying other parts of the open plain at the north of Bird Island. 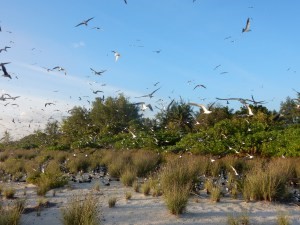 About 11 hectares of ground are kept clear for the nesting Sooty Terns, but prior to the birds’ arrival, further ground preparation is necessary. As far as possible, the area is mown in April and May to keep the vegetation short. Island conservation staff additionally trim some of the denser bushes to allow birds to nest underneath, and when possible, they also try to remove the entwining vine Lalyann san fan to prevent birds [from] becoming entangled. The success of this management depends on rainfall; in 2016, the early onset of the southeast trade winds, which generally (but not always) provide drier weather, did provide good conditions, and the birds started laying earlier than they have done for several years.

On top of this, 2016 appears to be a bumper year for them. In most years, some parts of the northern open plain remain unoccupied, but in 2016, virtually all parts have nesting birds. In addition, they have occupied low vegetation along the crest of the western beach extending south as far as the front of the hotel. Differences between areas that were settled early and those that are being occupied now are readily apparent. Few birds are in the air over areas that Sooty Terns occupied three weeks ago, and the birds there are (relatively) quiet. Where birds are arriving now, however, the air is full of wheeling Sooty Terns and their raucous calls, while those on the ground are calling also as they jostle for a place to lay their eggs. Most of the birds that are circling these areas now are in pairs and have very long outer tail feathers, signifying that they have arrived recently and have not spent time displaying and establishing nest territories on the ground; during these activities the outer tail feathers become worn and can even break off.

Our observations are showing that at present, nesting Sooty Terns are finding plenty of food within easy reach of Bird Island this year so that foraging birds can return reasonably quickly to relieve their incubating partners on the nest. However, the fish and squid taken by the birds can sometimes disappear, leading to sudden periods of food shortage. This happened during the last two years, so we hope they experience better times this year.

At present, we lack information from other Seychelles Sooty Tern colonies, and so we do not know whether the food supplies in the proximity of Bird Island are encouraging birds from elsewhere to seek nest[s] sited here. Could this account for the unusually large numbers this year? Or could events elsewhere, such as the cyclone, Fantala, that stuck Farquhar Atoll on 17 April, have forced birds from other colonies to move to Bird Island? Another mystery surrounding the lives of Sooty Terns!