It costs a fortune – the teeny tiny salt-cured fish eggs of the Acipenseridae family known as caviar.

It costs a fortune – the teeny tiny salt-cured fish eggs of the Acipenseridae family known as caviar. According to the FDA (Food & Drug Administration), the fish roe of the sturgeon is the only fish egg that can be classified as caviar. We covet the roe and will spend whatever it takes to enjoy the smallest morsel, in order to get the “mouth feel” that – very quickly – moves from a taste explosion to a beautiful memory. 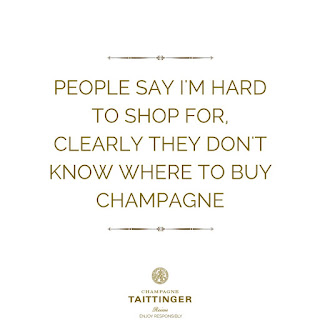 Some consider caviar an aphrodisiac but researchers cannot determine if it is because of the properties of the caviar or its social persona. It is high in zinc and can be considered on par with oysters as a love potion; however, many think that it has this romantic attribute because of the high social status associated with wealth that encourages the tilt to desire.

No one is completely sure of the derivation of the work “caviar.” Choices include: Italian word “Kahy-Jar” (cake of pleasure); Turkey, “havyar”; Iranian “hyayah”; or Persian Kag – viar (small black fish egg). 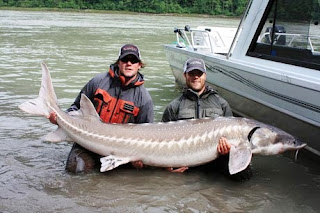 The sturgeon dates back to the time of dinosaurs (at least 250 million years); however, today they are found exclusively in the waters of the Northern Hemisphere. Most of them are anadromous, so they can live in the sea but need to commute to rivers in order to spawn (similar to salmon). The sturgeon is a bottom fisher and sucks up organisms through its lips, can live more than a century and frequently grows to be larger than a pickup truck. 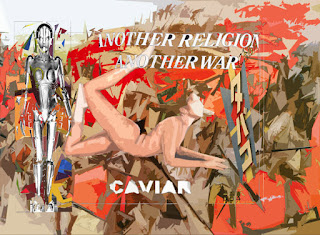 The year 1240 is the first recorded mention of caviar and the Russian Orthodox Church actually sanctioned the eggs as a “fasting food,” making it easier for peasants to follow the religious doctrine that called for forgoing meat for up to 200 days a year The leader of the Mongols, Batu Khan, visited an Orthodox Christian monastery in Uglich, north of Moscow. The monks served their new overlord a feast that ended with hot apple preserves topped with a serving of salted sturgeon eggs. It appears he was delighted since he did not destroy the monastery.

In the 17th century, Galileo, (the first recorded celebrity who enjoyed caviar), sent it as a gift to his daughter’s convent in Florence. By the 18th century caviar had become a royal gift and Peter the Great presented it to King Louis XV of France.

In the 19th century, technological advancements (especially ice making machines) permitted caviar to be shipped around the world and with the invention of refrigeration and the steamship, caviar was able to reach many destinations quicker and in good condition. The availability increased demand and with it, a rise in price. The higher the price, the bigger the demand.

Part of the European appeal for caviar was the association with the wealthy Russian aristocracy. The Industrial Revolution and railroad transit across Europe facilitated long distance travel resulting in access to Russian nobles who were showing up in Paris and Berlin with their entire entourage. The Western Europeans, with no wealthy aristocracy, were fascinated by the extravagance of the Russians who demanded and paid for their caviar, and the Europeans followed suit.

In the US caviar for many years was used to feed the slaves and poor European immigrants dined on inexpensive sturgeon meat called “Albany Beef” as it was caught in the Hudson River. The roe was served in bars as snacks as the salt encouraged guests to buy more drinks.

In the early 1900s, the United States became the world’s largest producer of caviar. The sturgeon population in the United States rapidly became depleted as the species was overfished. This led to a 1906 ban on commercial sturgeon fishing. Since that ban, sturgeon may be caught only by sport fishermen, and the species has become heavily monitored and regulated.

At the beginning of the 20th century, Harry Dalbow, a sturgeon fisherman moonlighting in a tomato packing plant wondered why caviar was not part of the new canning and preserving technology. This was the period when caviar started to become a luxury product. As the supply of caviar dwindled the product was sold in tiny portions with a limited shelf life for extraordinary prices that competed in price for precious jewelry. The demand in the US increased to the point where, in 1912 Dieckmann & Hansen opened Romanoff, the first retail shop for caviar in the lobby of the Waldorf-Astoria Hotel in New York.

Traditionally these bits of goodness were harvested from wild female sturgeons swimming in the Caspian and Black Sea. Today, sturgeon are farm raised in Italy, France, China and Israel, and we are able to satisfy our hunger for the tiniest of treats at a price that is not the size of the national debt. Although the Italian caviar does not come at a chocolate bar price, it is still more affordable (and available) than the brands from the Former Soviet Union.

Beluga, with its soft, extremely large eggs are most desired and range in color from pale silver-gray to black. The Starlet caviar (very rare) is small and once restricted to royalty from Russia, Iran and Austria. Osetra is noted for its medium sized eggs while the sevruga has smaller eggs and is gray in color.

The sturgeons are caught in nets and kept alive to bring to the fishery. While the process for gathering the eggs from the ovaries of the fish is unpleasant, the separated eggs are considered a luxury and there are no attempts to change the harvesting process. 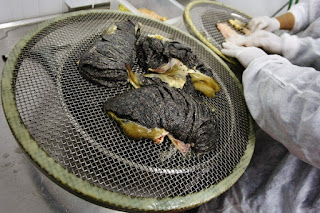 Thanks to the Italian organization, Calvisius, the leader in production and distribution of caviar, the world now has access to these tiny shiny black morsels (and we do not have to worry about relationships with Mr. Putin) from Siberian sturgeon (Acipenser Baerii) and it features a creamy, nutty flavor. Calvisius owns the largest sturgeon farm in Europe and, in Italy, maintains more than 60 acres of aquaculture tanks that breed the fish that account for over 20 percent of the world’s caviar production. The company was awarded “Friend of the Sea” certification for their sustainable aquaculture efforts. In 2014, global production of black caviar reached approximately 150 tons.

Not all caviar is created equal. For high marks, consider uniformity (general appearance and consistency), size, and color (age of sturgeon impacts on roe colors which will run from dark gray to golden brown as fish matures), maturity, separation of egg grains, fragrance, lucidity (shiny coat indicates freshness and storage system), and hardness of shell. Metal spoons cannot be used as the metal can change the taste of caviar; therefore, it is absolutely necessary to use spoons made from bone or mother-of-pearl (or plastic for the frugal). It can be served with complimentary foods such as potatoes or blini, it co-exists with crème fraiche and sour cream and will even accept pepper, onion, lemon or other herbs as accents. It should be served on ice at lower than room temperature to preserve the taste. Caviar cannot be frozen but should be kept in the coldest part of the refrigerator (26-32 degrees) and stored in its original container.

While tradition suggests that caviar be served with Russian vodka, French Taittinger Champagne and Bordeaux wines are more than delicious ways to dine on sturgeon roe.

This copyright article may not be reproduced without written permission from the author.