London lights up its history

You could almost smell the smoke and hear the crackle of the flames which destroyed most of London in 1666.

You could almost smell the smoke and hear the crackle of the flames which destroyed most of London in 1666. An interactive exhibition at the Museum of London vividly brings to life the Great Fire which started in a bakery on a September night 350 years ago. Panic spread through the city with a population of 400,000. Desperate citizens collected whatever they could to flee to safety. The more well-off paid large sums to load their belongings on to carts or boats in their desperate rush to escape. Many buried cherished possessions with the intention of retrieving them when it would be safe to return. A few, like the diarist, Samuel Pepys, included Parmesan cheese, which was especially valued in those days. 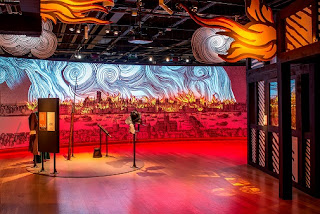 The streets were so narrow people would have been able to stretch across and shake the hands of their neighbors on the opposite side. The closeness of the houses explained why the fire spread so rapidly. Sadly, as happens today when there is a crisis, foreigners became targets and were falsely accused of starting the fire. In 1666, England was at war with France and The Netherlands, some Londoners turned on French and Dutch people they came across blaming them for the fire.

King Charles II personally took charge of the operation to fight the fire which took four days to bring under control. Surprisingly, given the scale of the disaster, only about five people died. More than 13,000 homes, businesses and structures, including St. Paul’s Cathedral, were destroyed. According to one account, the heat generated by the fire was so great that the lead roof of the cathedral melted.

The Great Fire broke out as London was recovering from the Great Plague which struck the city twelve months earlier. One benefit was that the flames also destroyed the filthy rat-infested streets and slums which spread the disease. Visitors to the exhibition are able to experience the destruction of the city through the eyes of people who were there at the time. One can also find out how the city rose from the ashes. The Fire! Fire! exhibition at the Museum of London is on until April 2017.

In a spectacular retelling of the story, a wooden replica of 17th century London was set ablaze on a barge on the River Thames. Crowds packed on to the river banks and bridges to watch the flames light up the evening sky reducing the painstakingly-created structure to ashes.

The commemorations of the fire are among a range of events to mark high points in the history of London. Throughout September an annual celebration of the River Thames will feature art exhibitions, river community events, regattas, river races, guided walks, foreshore archaeology, and environmental activities. The Totally Thames festival is a tribute to the spirit of Londoners through the ages who overcame disasters like the Great Fire to rebuild and create the vibrant and cosmopolitan city which exists today.