In back-to-back meetings today with senior officials of the French Ministry of Foreign Affairs and International Cooperation, the Zimbabwean Minister of Tourism and Hospitality Industry, Doctor Walter

In back-to-back meetings today with senior officials of the French Ministry of Foreign Affairs and International Cooperation, the Zimbabwean Minister of Tourism and Hospitality Industry, Doctor Walter Mzembi, extended his campaign to become the next Secretary General of the UN World Tourism Organization (UNWTO). To win France as a supporter, it is important to any candidate. Located in the very heart of European tourism and an acknowledged super-power in the global tourism industry, France is always playing a key role in travel and tourism and for Europe.

The Minister first met with Mr. Jean-Pierre Lacroix, Director for United Nations, and other international organizations within the French Foreign Ministry. This was followed by a meeting with Mr. Cyrille Pierre, Cabinet Director for the Secretary of State for External Trade and Tourism Promotion, again within the French Ministry of Foreign Affairs and International Cooperation.

Dr. Mzembi’s visit comes in response to an invitation extended to him by the French authorities which was issued in the immediate wake of the unanimous endorsement of his candidature by African Heads of State and Government at the recent AU Summit meeting in Kigali, Rwanda.

Respectful of Africa’s decision, the French authorities wished to hear first-hand that the interests of the global tourism sector will be in safe hands if Mzembi was elected UNWTO Secretary General.

France is a member of the UNWTO Executive Council. The support for France will be crucial.


Many recognize France as Europe’s number one tourism destination, attracting in excess of 80 million visitors a year. In economic terms, tourism constitutes some 10% of France’s annual GDP, with the industry directly employing more than two million people.

Acknowledging the pivotal role played by France in the genesis of what is, today, the UNWTO, Dr. Mzembi paid glowing tribute to the pioneering work of Robert Lonati, a French national, who headed the International Union of Official Travel Organizations (IUOTO) from 1957 until 1974, building it in terms of membership and focus and steering it to become, in 1975, the UNWTO, with its headquarters in Madrid, Spain. In that same year, Lonati was elected the first Secretary General of the UNWTO, and continued in that position until 1985. 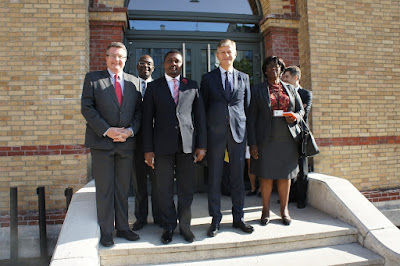 The Minister paid similar tribute to another French national, Franceso Frangelli, who headed the UNWTO for three consecutive terms, from 1997 to 2009, and who oversaw the processes leading to its becoming a specialized agency within the United Nations family in 2003.

“The importance that France attaches to tourism, in all its multi-faceted aspects, is very clear,” said the Minister. “Tourism is a major component of the French economy, contributing hugely to the fiscus, to employment creation, and to overall national development.”

“France is, therefore, more than just a normal stakeholder in the global tourism industry. Naturally, UNWTO is an important organization for them. Naturally, France will take a very keen interest in whomsoever is elected to lead that organization going forward,” he noted.

“That is why I am here in Paris. So that those responsible for the tourism industry, for policy-making with regard to the future development of tourism both to and from France, and globally, can meet me, get a feel for me and what I am able bring to the UNWTO table.”

Thanking the Minister for his visit to the Ministry and for sharing his vision for the future of the UNWTO should he be elected to the post of Secretary General, his French hosts were effusive in their congratulations on his candidature and in their recognition of his qualifications for the job.

“They were left in no doubt at all as to the pedigree of the candidate, his credentials and experience and his prescriptions to the challenges confronting global tourism,” said a source privy to the discussions at the French Foreign Ministry headquarters.

Following the Minister’s detailed presentation of how he foresees the future evolution of the UNWTO, Cabinet Director Pierre commented that he (the minister) had “touched on all the important points relevant to France.”

In essence, these include the need for the UNWTO to develop and coordinate a comprehensive, effective and sensible response to the security challenges which continues to confront France and, more broadly, the global tourism industry. Both parties also recognized the need for the tourism industry to be more inclusive, more balanced, and to embrace and be accessible to all levels of society across all nations.

Tourism should be more socially responsible and for it to make an effective contribution towards the achievement of the UN’s sustainable development goals (SDGs), three of which relate directly to tourism.

Confirming himself to be in complete agreement with the important areas of focus raised by his French hosts, Dr. Mzembi zeroed in on the scourge of terror, noting that “the issue of tourism and security is a consistent theme emerging from all those with whom I meet as I engage members of the Executive Council and indeed others, whether it is in Northern Africa, Eastern Africa, or here in Europe.”

“None of us is immune to the kind of mindless violence which has been unleashed against totally innocent men, women, and children, simply wishing to enjoy the beauty of nature, culture, and art in their own and in foreign countries.”

“But,” the Minister cautioned, “in the industry, under the umbrella of the UNWTO, yes, we need to come up with a coordinated, effective response to how we deal with the impact of terror, and, beyond that, to how we deal with the tourism-related impact of natural disasters, the impact of disease pandemics such as ebola, the impact of climate change.” He went on to say: “In our approach to all of these challenges, perhaps especially in so far as terror is concerned, we need to be measured, sensible, and to guard against over-reaction.”

“The most effective way of countering terror directed against tourists, is for people of the world to keep traveling,” insisted Dr. Mzembi.

Thanking Dr. Mzembi, again, for his initiative and for a most “informative and constructive exchange of views” about the UNWTO and its future trajectory, the French Government officials assured the minister that they would keep in close touch with him.

The final leg of the Minister’s current campaign visit will be Rome, Italy, where he is scheduled to meet with his counterpart.