Visitors to Qatar increase in August

Visits of GCC nationals to Qatar continued to increase in August, with year-to-date arrivals growing by 7% compared to the same period in 2015, a Qatar Tourism Authority report has shown.

Visits of GCC nationals to Qatar continued to increase in August, with year-to-date arrivals growing by 7% compared to the same period in 2015, a Qatar Tourism Authority report has shown. Overall, total visitor arrivals in the month of August increased by 2% compared to August 2015.

August is typically an off-peak month with declines in visitor arrivals compared to the rest of the year. The increase in arrivals this August, compared to August of last year, comes after efforts to incentivize travel to Qatar through Qatar Summer Festival promotions and entertainment activities. These included special packages from 56 hotel establishments, shopping promotions in malls across Qatar, and entertainment events throughout the month, including the Doha Comedy Festival. 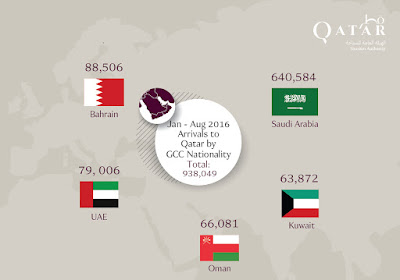 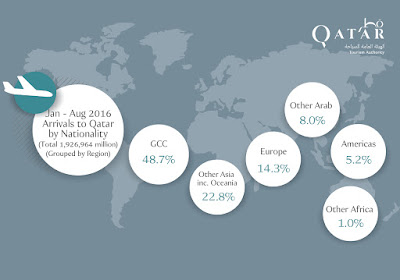 QTA projections point to further modest increases in visitor arrivals in the coming months, supported by September’s Eid Celebrations in Qatar and the docking of the first cruise ship of the season in October.

Long-recognized by the country’s leadership as an avenue to further Qatar’s development, tourism has been designated a priority sector by the government. Qatar Tourism Authority’s mission is to firmly establish Qatar on the global map as a world-class tourism destination with deep cultural roots. In 2014, QTA launched the Qatar National Tourism Sector Strategy (QNTSS), which seeks to diversify the country’s tourism offering and increase the sector’s contribution to Qatar’s economy by 2030.

QTA works in partnership with public and private stakeholders to achieve this mission by planning, regulating and promoting a sustainable and diverse tourism industry.

As part of its planning efforts, QTA identifies types of tourism products and services that will contribute to the Qatar tourism experience, and works to attract investment for their development.

QTA promotes Qatar as a destination around the world, through its destination branding, international representation and participation at trade shows, and by developing a rich calendar of festivals and events. With a growing international presence, QTA’s representative offices in London, Paris, Berlin, Milan, Singapore, and Riyadh support QTA’s promotion efforts.

Since launching QNTSS, Qatar has welcomed over 7 million visitors, and achieved an average annual growth in arrivals of 11.5% between 2010-2015. The economic impact of the tourism sector in Qatar is becoming increasingly visible with 2014 estimates showing a total impact on Qatar’s total GDP of 4.1%.

The COVID-19 impact on Hawaii tourism has been considerable for the month of August 2020 with visitor arrivals to the Hawaiian Islands dropping 97.6 percent ... Read More