Pisa. Go for the tower. Stay for the cheese. Busti Fauglia

There is a secret that the Italians know but do not share: Italian cheese rules the world.

There is a secret that the Italians know but do not share: Italian cheese rules the world. We are aware of the quality and popularity of Italian wines, Italian designs, Italian music and art – but the fact that Italy leads the world in cheese-making is not a fact that rises to the top of the list in a “did you know” conversation. 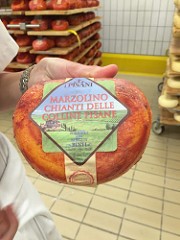 When I was told we were going to visit a cheese factory near Pisa, about a one hour drive from the city center, I had a vision of watching sheep and goats munching on green grass along gently sloping hills while cows in pens waited patiently to be hand-milked by people from a nearby village.

When the van drove off the highway and pulled up to a security gate that required a guard to open, and I counted dozens of parking spots surrounding stainless steel silos, I thought that I misread the itinerary and we were actually going on a tour of a winery.

I was even more amazed that before we could enter the working “cheese factory” we had to put booties over our shoes, plastic covers over our clothing and to complete the sterile look, add hair nets and face masks. What was the connection between sterile clothing and cheese? 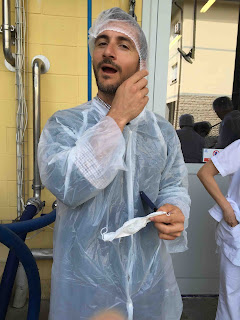 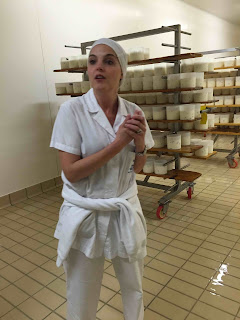 Importance of Cheese to Italy

The reality is that 21st century cheese is frequently made in factories. While small artisanal producers are still producing small batches of cheese in caves, the global demand for cheese is so huge that a modern factory with cutting edge technology is a necessity. 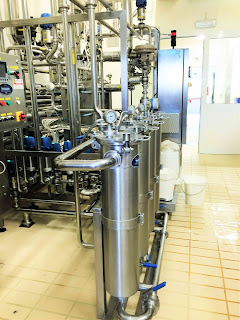 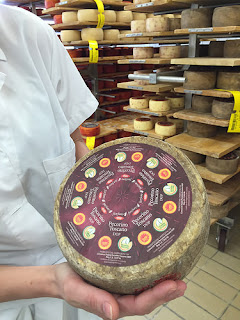 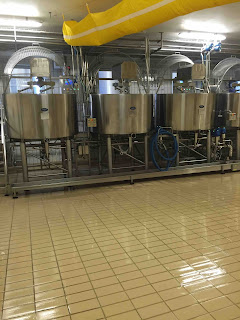 Data suggests that cheese has been consumed for 4000 years. Some historians believe that it was accidently discovered by an Arabian merchant who put his milk supply into a pouch made from a sheep’s stomach. During his journey through the desert the rennet in the lining of the pouch, combined with the heat from the sun, caused the milk to separate into curd and whey. The whey satisfied his thirst and the curd (cheese) satiated his hunger.

Asian merchants brought the art of cheese making to Europe and the Roman Empire was its center. Many homes had a room dedicated to cheese-making (caseale) and Parmigiano Reggiano (originated in Parma) so valued cheese that it was used as collateral for bank loans. Cash for cheese loans dates to the 15th century and the system continues to this day.

In the Middle Ages, from the decline of the Roman Empire until the discovery of America, cheese was made by the monks in European monasteries. Gorgonzola was made in the Po Valley in Italy in 879 AD and Italy was the cheese center for Europe during the 10th century. According to documents from 1070, Roquefort was made in the Monastery of Conques France.

Italy produces 13 tons of milk that is converted into 1 million tons of cheese (more than 44000 tons are PDO/Protected Denomination of Origin – cheese). Italy exports almost 250,000 tons of cheese with a value of 1.4 billion Euros. Most of the cheese produced is Mozzarella (250,000 tons produced yearly), followed by Grana Padano (163,000 tons per year) and Parmigiano Reggiano (116,000 tons a year). Global popularity also includes Gorgonzola PDO, Pecorino Romano PDO, Asiago, Taleggio and Provolone. 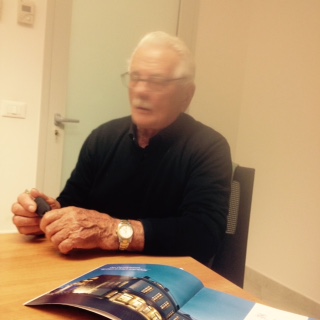 To protect the Italian cheese industry from imposters and counterfeiters, REAL frommaggio lovers who demand their cheese be of the highest quality, always look for the DOP, Denominazione di Origine Protetta on the label. Other branding for the sake of purity and quality includes PGI (Protected Geographical Indication) and IGP (Indication Geographique Protegee) – these designations validate the product from a clearly defined region: the product must be manufactured or processed in the designated and approved area in order to receive the stamp.

A major cheese manufacturer in Pisa is Formaggi del la Familglia Busti. The history of Busti is fascinating. In 1955, the Busti brothers, Alessandro and Remo were shepherds from Fauglia, in the province of Pisa, Tuscany, following the transhumance method of moving the family and the herd to the country side of Alta Garfagnana and Alta Reggiana following a seasonal cycle.

A member of the family (Aunt Armida) had a small cheese making business in a nearby village and she asked Remo if he wanted to take it over. He gradually grew the business making his first large transaction in the 1960s. He personally delivered the kilos of cheese to the customer by taking a train to the buyer. The business has continued to grow and now is a major player in the Italian cheese industry.

Today the factory produces cheese that is distributed internationally while locals and visitors are able to take a Busti cheese with them as they continue their exploration of Pisa. The Spaccio (factory outlet) is located near-by, and is dedicated to cheese promotion, appreciation and tastings. The Spaccio offers pre-cooked and ready-made meals, prepared in an Angelo Po designed kitchen.

Italian Cheese. At the Beginning

Before it is cheese it is milk – especially ewe milk from selected areas of Tuscany. The nutritious ewe’s milk comes from sheep and considered richer in vitamins A, B and E, calcium, phosphorus, potassium and magnesium than the milk from cows.

Important pastures in Tuscany include Pienza and Siena. Some milk is collected in Val d’Orcia, province of Grosseto, the hills of Pisa and Livorno, the Tyrrhenian coast (from Vada to Suvereto) and Migliarino, San Rossore and Massciuccoli Park. Additional milk sources include: Bassa Maremma and Alta Tuscia, located between Tuscany and Lazio and Ligurian villages. The milk is transferred to the Busti in refrigerated trucks.

In 2015 Busti launched a new product made from goat’s milk which was considered a novelty and very innovative as Tuscany maintains a very traditional dairy sector which historically concentrated on the production of pecorino (ewe’s milk).

Busti is noted for its careful selection of milks and uses traditional working methods. The company employees 60 people and they use raw milk and a dry salting process (the salt comes from the nearby salt flat of Volterra). Some of the cheese are shaped by hand (i.e., Marzolino) while the outside of the cheeses are covered with extra virgin olive oil, and olive grounds. For the slow maturation process that cheese requires, Busti places the cheese on beds of spruce and straw where they develop in controlled and natural environments. 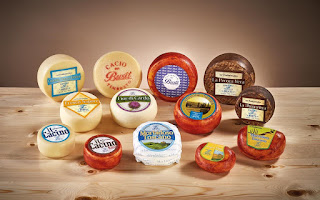 2. I Tradizionali. Some are made with cow’s milk with the addition of ewe’s milk. Capriccio Toscano is made with goat’s milk and vegetable rennet with a firm white edible skin.

3. Le Delizie. Combination of pecorino and artisanal additions such as pistachios from Bronte, Sicily; truffles from Forcoli, Pisa; red Chilli peppers from Peperita in Bibbona; and aromatic herbs from organic farms.

4. I Pisani. Acciaiolo, a pecorino named after the village dairy; pecorino Fauglia and raw milk Transumanza.

5. Le Selezioni. Pecorino Pascoli di Pienze, carries a QR code and an ID number, enabling the traceability of the milk and the cheese; Pecorino Toscano DOP – produced exclusively using select milk from herds that are part of the Consortium of PDO Pecorino Toscano.

6. GLI Speciali. High quality pecorino made from a specific choice of raw materials and a special ripening technique 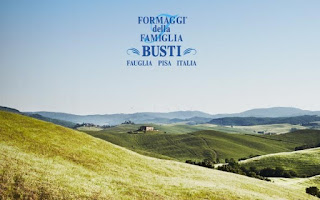 The Busti cheese experience should not be missed. It is definitely a reason to visit this beautiful bucolic part of the planet.
This copyright article may not be reproduced without written permission from the author.