ITALY (eTN) – My recent visit to Pompei revealed a pleasant surprise. The ancient historical town unearthed after centuries from the ashes belched out by the Vesuvius volcano, was seen under a different light: luminous and orderly – miracle brought about by the long restoration works of the last few years. 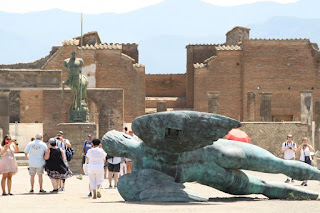 Changes were noted starting from the entrance gate to the eternal city, updated with modern gates that moderate the flow of visitors. The roads to the central districts are flanked by colorful oleander trees whose flowers fill the air with a delicate scent and offers restoring shade during the overheated hours of the day.

Most of the remaining entrances are fenced to avoid trespassing by self-absorbed nose-in-the-air tourists. Only the mostly-known domus (houses) finely restored are open to visits, e.g., the spas, the house of the Faun, the house of the Golden Cupids, the Villa of the Mysteries, and many more of which five new extraordinary important domus opened to the visitors recently.

One of the major attractions, however, remains – the Lupanare (the brothel) – so named because “Lupa” for “she-wolf” was the Latin term for a prostitute who would howl to signal customers. What is left of the amusing house of pleasure – déjà-vu as an entertaining site to the elders – is a curios attraction for the teenager generation who stop to admire the finely-restored frescoes of real sex scenes. Selfies must be fast here to avoid blocking the endless queue, as the staff at the entrance will howl to move out quickly. Only ten people at a time are permitted to fast transit in what is now an ancient sex art gallery, in order to avoid humidity from entering that would endanger the paintings. The price list of the various “professional services” provided by the young “ladies” (mainly slaves of Greek origin) stimulates amused smiles and comments.

The dream of Igor Mitoraj

The presence of 28 large-sized bronze sculpture masterpieces of Igor Mitoraj, representing mythological idols, melt perfectly among the ancient ruins of Pompei and its long-preserved art. 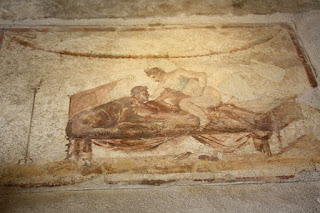 The exhibition of the works, lasting until January 8, 2017, is a tribute by Minister Dario Franceschini to the dream of the artist, who died in 2014, to see his works of art in Pompei.

The first bronze statue of giant proportion represents Dedalo (Dedalus), a skillful Greek craftsman that constructed wings for his son Icarus, which has been positioned on a special platform built on the terrace of the Temple of Venere. The statue’s face looks over the Peninsula of Sorrento and the entrance to the excavations with thrilling effect. 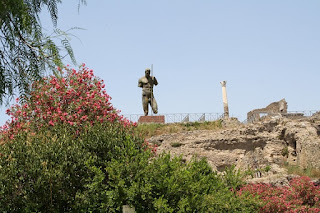 The other statues are distributed along the Forum of Pompei, the Via dell’Abbondanza, and the major sights. Among the 28 deity are: Ikara that Mitoraj imagined to be the sister of Icarus, the Centurion. and the Sagittarius. 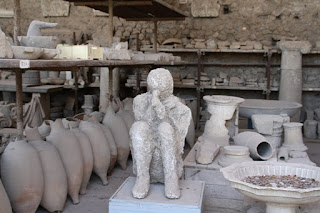 The visit to Pompei included a tour guide and lunch, and an afternoon visit of the major sites of Naples – all possible in one day from Roma.