Uganda’s green carpet “Oscars” – and the winner is…

This year’s just-concluded Uganda Film Festival (UFF) was no "red carpet" affair, for it was played out on the green lawns of Kampala Serena Hotel, culminating in an elaborate awards gala night.

This year’s just-concluded Uganda Film Festival (UFF) was no “red carpet” affair, for it was played out on the green lawns of Kampala Serena Hotel, culminating in an elaborate awards gala night. This year’s theme, “Promoting Culture Through Film,” featured a whole week of free screenings of local films at the leading cinemas in the capital and public stadiums, along with master classes for beginners, producers, and directors, facilitated by Timothy Owase from the Kenya Film Commission. 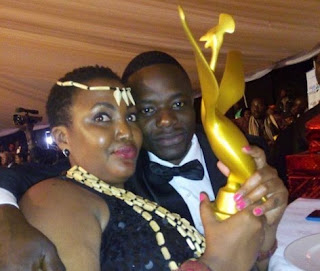 In its fourth edition, Uganda’s version of the “Oscars” is aimed at showcasing the local film industry and generating interest both locally and internationally. It was organized by Uganda Communications Commission (UCC).

The event attracted over 130 films in 17 film categories from short films, feature films, documentaries, animations, and TV dramas, to student categories, including East Africa. Other attendees included artistes, digital television stations, camera persons, and videographers. “This is a great opportunity for Uganda’s film industry,” said UCC`s Executive Director, Godfrey Mutabazi. “With the ease and improved quality of broadcasting, there is need for much more local content. As a regulator of the communications sector in Uganda, UCC will use UFF to empower you, with a view to developing local content.” He noted that UCC recently set the local content quota at 70% and pledged support to the industry beyond cash prizes and awards. The country’s Vice President, His Excellency Edward Kiwanuka Sekandi, who was the chief guest at the ceremony, reiterated government’s commitment to working with all stakeholders for the education and transformation of Uganda.

As a prelude to the event, UCC, in conjunction with the Uganda Film Makers and Artists Association, carried out a nationwide sensitization campaign to enlighten upcountry residents about the Uganda film industry.

Other big winners were Nisha Kalema, best actress for her role in “Freedom,” and Hassan Mageye, best actor in “Invisible Cuffs,” with “Majambere Le Fonceur ” from Burundi bagging best East African film. Best Animation was awarded to “Runaway Rolex” by Alex Musisi that brought to life a local quick-fix meal of wrapped and rolled eggs (rolex – no relation to the watch) fresh from winning acclaim as Uganda’s signature meal at a recent food festival.

The judges were comprised of an impressive lineup, including Mombasa-based Clifford B. Okumu, a film director, script writer, and part-time lecturer; Sister Dominic Dipio, Professor of film and literature at Makerere University; Joshua Ssali, film tourism consultant who promotes Uganda’s diverse tourism through film and was part of the “Queen of Katwe” audience for public analytical screening in Pasadena, California; Femi Odugbemi, an award-winning film-maker and photographer, and a respected voice in Nigeria’s art and culture scene; and Leonce Ngabo, Chairperson of the East African Film Network and member of the grand jury of the feature films at the Pan-African festival on cinema and television of Ougadougou, Burkina Faso.

Since the first festival in 2013, the judges noted improvement in quality, sound, cinematography, and script writing.