Tourism is everyone’s business in the Aloha State of Hawaii. It doesn’t make any difference if one works in the travel industry or not.

Tourism is everyone’s business in the Aloha State of Hawaii. It doesn’t make any difference if one works in the travel industry or not. If the travel and tourism industry is sick in Hawaii, the population sneezes.

This counts for many tourism economies in the world, such as Hawaii, the Vanilla Islands, Caribbean, or many South Pacific Island nations , Canary or Balearic Islands in Spain. It is true in regions from Antalya to Florida, from Pattaya to Bali, from the Whitsunday Islands to Cape Town, all these territories are dependent on the largest industry in the world – travel and tourism.

In the case of Hawaii, people in the land of Aloha enjoy paradise scenery every day, but they often live on minimum wage.

The State of Hawaii, for example, has one of the largest percentage of homeless in the United States. 50-year-old couples have to share small apartments with other couples, because rent is too high. Be prepared to pay the price of paradise when going to Foodland or Safeway, or when visiting restaurants. The times for locals to enjoy reduced local prices, called Kamaaina rates, are long gone, except for some rare exceptions.

Visiting friends and family on the neighbor islands becomes a once-a-year event with round-trip air fares on Hawaiian Airlines often exceeding $350 compared to Kamaaina coupons of $29 each way available back when Mahalo and Aloha Airlines were in existence. This is all now recent history.

Tourism businesses love Hawaii. All the big companies – Marriott, Starwood, Hyatt, Hilton, Four Seasons – are making great money in the state, while many of their friendly workers are working long hours with a bright smile on their faces. They represent the Aloha Spirit. Living Aloha draws tourists from around the globe to Hawaii like magic. Even Hainan in China tried to copy this concept and stole the Hawaiian Tourism logo some years ago.

Hawaiian hospitality industry workers represent the Aloha Spirit with pleasure, but are earning the lowest salaries in the nation.

This leaves plenty of profit. Money large tourism business generate go to their headquarters in Washington, Chicago, or in some cases to Dubai or China.

One rare exception of a major Hawaii Hotel company still based in Hawaii is Outrigger Hotels. This hospitality group remains to be Hawaii based.

That’s why collecting all taxes becomes essential not only for the State, but for the people of Hawaii. 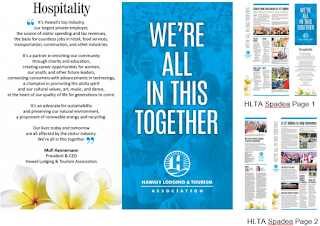 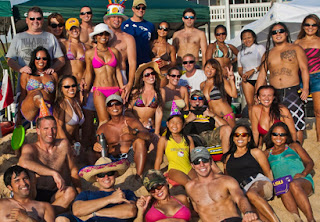 The local population simply cannot take the burden to build infrastructure for tourism and pay for housing, rail and services for the homeless.

Big business, the hotels and resorts should have an interest in moving homeless people from prime Waikiki Beach stretches, improve public bathrooms and showers on Hawai’s beaches as well. This should not stop with a company donating to a charity or participate in a soup kitchen.

Kamehameha Highway coastal roads on the North Shore on Oahu need walkways and bike lanes. Roads in the Aloha State are the worst in the Nation.

Tourism is the central focus of the economy for Hawaii, and big businesses involved in a conspiracy to avoid paying taxes is theft on every taxpayer in Hawaii.

eTN touched upon the issue of resorts in Hawaii charging mandatory resort fees. Even though such fees are linked to room rates and a hotel guest cannot opt out, the 9.25% transient accommodation tax is not charged on these fees. The full amount of the fee goes to the hotel.

Two years later, the number of hotels in Hawaii charging mandatory resort fees has doubled. Back in 2014, hotels like Hyatt waived fees for local guests. This has now changed.

Fees as high as $70 per room night are tagged on a guest portfolio, many times unexpected for the customer.

What sounds like a scam to visitors is also a scam to the Hawaii taxpayer.

eTN reached out to Maria E. Zielinski, Director of Taxation, State of Hawaii. A spokesperson for the director confirmed Transient Accommodation Taxes (TAT) of 9.25% should be charged if a resort fee is a mandatory part of the per night room rate.

eTN reached out to Starwood Hotels and Resorts. Dara Young, the Director of Public Relations. She responded, saying resort fees are taxed only with GE taxes.

Stefanie King, representing Hilton Hawaii, confirmed the largest hotel in Hawaii – Hilton Hawaiian Village – is not charging Transient Accommodation Taxes on Resort fees. She went on to confirm that resort fees are only taxed with GE taxes.

The Hawai‘i Lodging & Tourism Association represents most major hotels in the State of Hawaii. eTN reached out to the organization now under leadership by former mayor Mufi Hannemann. From a mayor to the head of the lodging organization alone demonstrate the connection between tourism and the administration.

It took daily follow-ups for 19 days, and no return call by the Director. Finally on August 29 a written statement by Jared Higashi, Director of Government and Community Affairs, was received by eTurboNews

He wrote: “Mahalo for your patience! Apologies but we have decided to go without comment on this inquiry.”

eTN talked to Hawaii State Senator Gil Riviera. He agreed that TAT should be charged, and he was surprised this money was not collected.

He asked eTN publisher Juergen Steinmetz, who has his residence in the Senators district if TAT taxes should not exclusively be used for Hawaii Tourism Authority Marketing activities.

Steinmetz agreed and said: “Many issues we face living in Hawaii are related to tourism, and they in return are related to promoting tourism to our state. Even hiring a bathroom attendant on Waikiki Beach would promote tourism indirectly.”

The citizens in Hawaii should benefit from taxes due. Taxes may help to fix sidewalks and bike paths tourists use, it could improve bathroom and shower facilities on our beaches, and it could help homeless people that make the heart of Waikiki Beach their home.

Summing up the issue, it almost sounds like a criminal conspiracy involving the Hawai‘i Lodging & Tourism Association and Hawaii’s largest tourism businesses, hotels and resorts, tax authorities, and the Hawaii Tourism Authority in not enforcing the collection of all Transient Accommodation Taxes when clearly due.

eTN reached out to Hawaii Governor David Ige. The governor was interested in hearing what we had to say. Stay tuned for further clarification on this issue.

Tourism is and remains everyone’s business in Hawaii. Even the Lodging Association said: “We’re all in this together”, and they meant the travel and tourism industry in Hawaii.