Hot on the heels of his successful two-and-a-half-day visit to Egypt earlier this week, Zimbabwe Tourism Minister Walter Mzembi has brought his UNWTO campaign effort to Tunis, capital city of the Republic of Tunisia – the latest stage of his current outreach program.

Like Egypt, Tunisia is also a member of the UNWTO Executive Council. Its support, therefore, will be crucial come election-day in May 2017, when the Council gathers in Madrid, Spain, to decide who will become the next Secretary General of the organization when the incumbent, Dr. Taleb Rifai a Jordanian national, stands down.

Warmly welcomed by his Tunisian hosts, Dr. Mzembi first met with the Minister of Foreign Affairs, Mr. Khemais Jhinaoui, who was accompanied by senior officials from the Political and Economic Affairs Departments of the Ministry.

Tracing the evolution of the fraternal relationship which exists between Tunisia and Zimbabwe, Minister Jhinaoui expressed his delight at receiving Dr. Mzembi and welcomed the opportunity for a detailed exchange of views focusing on how the two countries could work together in the future to further strengthen already existing ties, including the tourism sector.

Minister Jhinaoui congratulated Dr. Mzembi on the progress made thus far with regard to his bid to secure the post of Secretary General of the UN World Tourism Organization, and noted the strong boost given to that bid by the recent AU-Summit endorsement of his candidature.

Minister Mzembi gave a detailed presentation of his vision for the future trajectory of the UNWTO should he be elected to the post of Secretary General. Both ministers agreed on the positive impact his election would have, not only in terms of mainstreaming tourism within the continental African development agenda but, more broadly, in terms of injecting fresh impetus and focus on addressing the serious challenges which, today, confront the global tourism industry. 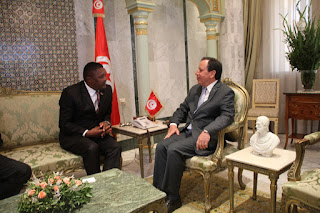 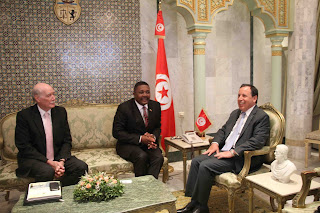 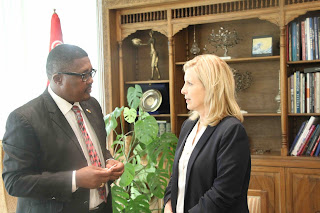 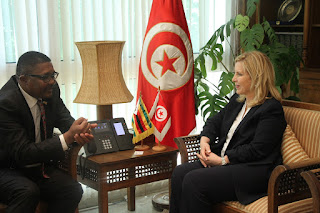 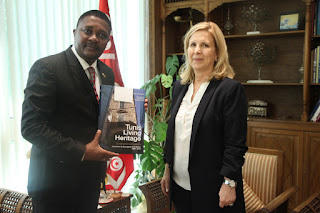 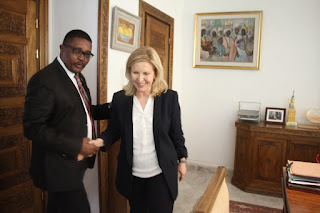 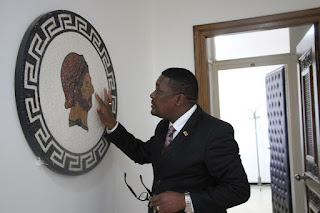 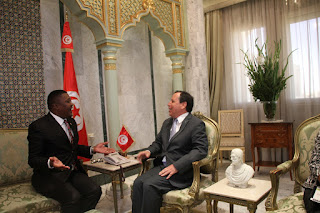 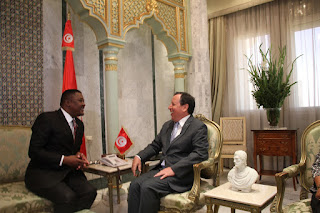 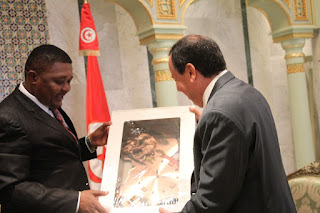 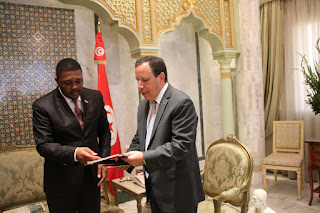 Minister Jhinaoui complimented Dr. Mzembi for the depth and clarity of his vision and for the evident passion and dynamism underpinning that vision. He said he would immediately share the substance of their discussion with the Tunisian Prime Minister and the Head of State, His Excellency, President Beji Caid Essebsi.

The two ministers agreed to keep in close contact as the UNWTO election process enters the formal nomination phase, leading towards the primary vote to be cast by the by the 32 Executive Council members when they meet in Madrid, Spain, in May 2017.

Later in the day, Hon. Minister Mzembi met with his Tunisian counterpart, Ms. Salma Elloumi Rekik, the Minister of Tourism and Handicrafts.

He warmly congratulated her on her re-appointment, just the previous day, to the Tourism and Handicrafts portfolio – the first African colleague to do so.

The two ministers agreed that every effort should be made to pursue the path of greater cooperation between Tunisia and Zimbabwe, in the tourism sector. As an immediate next step and so as to set out a concrete basis for such intensified cooperation in the sector, the ministers agreed to rapidly finalize the Memorandum of Understanding (MOU) they originally initiated in 2014.

The ministers then held detailed discussions on the current status of global tourism, highlighting the various challenges which confront the industry today and agreeing on the important role UNWTO must continue to play in mobilizing and coordinating the international response to those challenges.

The ministers spoke at length about the current and future development of tourism on the African continent and of the need for African countries to intensify their efforts, at the national, regional, and continental level, to ensure that in each country and, more broadly, within the AU’s Agenda 2063, “Tourism” is accorded its rightful status as a powerful engine for rapid, effective socio-economic development across the continent.

With specific regard to Tunisia, the ministers noted the serious impact recent terror attacks and the resultant heavily negative travel advisories had had upon foreign tourist arrivals, especially from Tunisia’s traditional source markets in western Europe.

Dr. Mzembi agreed that finding an effective approach to the issue of tourism and security was absolutely essential to the future well-being and development of global tourism. It counts not only as a vehicle for more inclusive socio-economic development, but as an effective tool to build bridges between peoples and cultures, to promote greater international understanding, and to contribute towards global peace and harmony.

“In order to fulfill its true destiny, UNWTO needs to be fully universal in terms of its membership. A number of major players remain outside the organization. We need them inside with us, especially if we are serious about promoting a meaningful discussion and seeking effective solutions to the burning issue of the day – that of tourism and security and related issues such as unilateral, unfair, and often excessive travel advisories which can have a devastating effect upon tourism, especially in developing countries,” said Minister Mzembi.

Minister Rekik expressed her appreciation for the vision outlined by the mercurial engineer in terms of the development of the global tourism industry and confided that her colleague, the Foreign Minister of Tunisia, had telephoned her immediately after his meeting with him to record how impressed he had been with the clarity and farsightedness of the minister’s vision, should he be elected to the post of Secretary General, to continue and build upon the fine legacy of Mr. Taleb Rifai.

From Tunis, Hon. Minister Mzembi travels to Nairobi, Kenya, venue for the 6th Tokyo International Conference on African Development (TICAD VI) where he will have an opportunity to engage and interact with a range of African Heads of Delegation as well as with senior officials of the Japanese Government.

Held every three years and alternating between Japan and the African continent, the TICAD forums provide an opportunity for African leaders to engage directly with the political leadership of Japan and, in coordination with the African Union Commission, the UNDP and the World Bank. All of them are TICAD co-organizers. The minister is seeking to align Japanese development support and, wherever feasible, Japanese private sector engagement (itself often supported by or supplemented by Japanese Government funding) with Africa’s agreed continental development agenda(s) across a variety of sectors.

Since TICAD IV (Yokohama, 2008), tourism development has been a sub-pillar of Japan’s broad cooperation matrix with African countries.

Japan, like China and a number of other Asian countries, is actively promoting out-bound tourism and, via institutions such as the Japan Tourism Agency and JATA, is seeking new, secure and safe travel destinations for its nationals. Africa certainly features in Japan’s considerations, and TICAD provides an appropriate and effective platform for a collaborative dialogue towards realiing the undoubted potential of greater tourism exchanges between Japan and Africa.

Zimbabwe, which already benefits from a steady flow of tourist arrivals from Japan, albeit almost entirely focused on the Victoria Falls, is well placed to take advantage of Japan’s focus on out-bound tourism and the possibilities of enhanced Japanese financial and technical support, via TICAD, for tourism development.

In addition to seeking the endorsement of the Japanese Government for his UNWTO election bid, Hon. Minister Mzembi will be seeking to encourage further Japanese tourist travel to Zimbabwe.

With its impressive and varied tourist product and given the general peace and tranquillity which prevails across the entire country, and given also the burgeoning relationship between Japan and Zimbabwe – evidenced by the invitation extended by Prime Minister Shinzo Abe to His Excellency President R.G. Mugabe, to make an official visit to Japan in March this year – it is expected that this third and final leg of Dr. Mzembi’s current travels will prove to be as successful as the first two have been.