Seychelles “Carnival of Carnivals” showcases countries from around the world

For three days every year, the “Carnival of Carnivals” showcases not just the passions of the Seychelles, but those of nations across the world.

For three days every year, the “Carnival of Carnivals” showcases not just the passions of the Seychelles, but those of nations across the world.

Every year, countries from across the world come to the Seychelles islands to experience the color, atmosphere, and excitement of its international carnival festival. With cultures and nations of all kinds represented, it is a melting pot like no other. With tropical waters and idyllic beaches, the 115 islands of the Seychelles are best known for being the ultimate paradise location.

Spread across 155,000 square miles and just over 1,000 kilometers off the north coast of Madagascar – and only a few degrees below the equator – Seychelles is very much a crossroads between Asia and Africa. Yet despite its diverse blend of ethnicities and customs, on the whole it culturally leans towards the latter, an identity that is clearly on show when the festival comes to town.

During this 3-day extravaganza, more than 1,500 participants from nearly 30 countries descend upon Africa’s smallest nation to show off their skills in the spirit of diversity and unity. Arts, history, heritage, and culture all play a part in each nation’s act. Seychelles itself uses the event to broadcast its proud customs to the rest of the world through the multitude of media outlets that descend upon the main island of Mahe every year.

“No less than 23 delegations have flown to the Seychelles for this year’s carnival,” Minister of Tourism, Alain St. Ange, told a crowd at the 6th annual event this year.

“To you all I say you are once again flying the flag, your flag, at an event referred to as the United Nations gathering of cultures.”

“Like us, you know and you appreciate that showcasing one’s culture is putting people at the forefront, because we cannot have culture without our people.” He expressed his wishes that all countries present could appreciate his home nation’s culture, “Just as we are transfixed, again and again, year after year, by yours.”

His words are no understatement. Ever since the carnival began in 2011, it has drawn in representatives from Europe to India, the Americas and further afield, in a dazzling display of colorful patriotism that has enthralled locals and visitors alike ever since.

Partnering with their Indian Ocean neighbors, Reunion, the Seychelles launched the carnival 6 years ago. St.Ange said it was conceived as part of a dream to bring the world together in a cultural event that promoted the spirit of peace and dialogue, as well as harmony, regardless of political, racial, or religious differences. 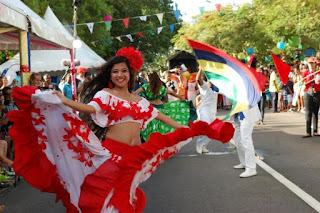 It kick-started with a bang, as the city of Victoria was turned into an entertainment platform with cultural music and food filling the streets. Participating countries were encouraged to set up al fresco restaurants in order to showcase the culinary delights of their home nations. The theme, “a melting pot of cultures,” truly had two meanings.

The second day saw floats gathering at the Stadium at Roche Caiman which moved through the city’s main streets, where the procession could be enjoyed by all. In the spirit of cohesion, the local population was invited to join the party by wearing their own costumes and accessories. Local artists also produced a song for the event, which included passages in each of the nation’s three national languages – English, French, and Creole. A family fun approach finished the event on the third day, with food and drink stalls set up outside the stadium and music performed way into the night. 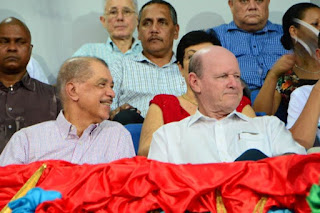 President of Republic of Seychelles James Michel (left) with The Minister of Tourism and Culture of Seychelles, Alain St.Ange

In the 5 years since, the carnival has cemented itself as the biggest cultural manifestation in the Seychelles. From the Dusseldorf carnival of Germany to the UK’s Notting Hill Carnival Roadshow Company, the Indonesian Carnival and delegations from Russia, Morocco, and Kenya among others, many nations have returned time and time again to experience the atmosphere.

By 2014, 26 foreign countries attended; by 2015, that had risen slightly to 29, alongside around 100 media outlets spanning the globe. Guests of honor were by this point a common thing. Last year from the Ghanaian king of the Ashanti people – or Asantehene – Otumfuo Osei Tutu II visited. He told the crowd that the carnival’s spirit should encourage youthful talent as well as provide a few days of fun every year. His presence was particularly symbolic, as it came almost 120 years after his royal family had been exiled to this island nation.

This year – 2016 – the number of delegations was smaller – 23 overall – but the atmosphere was not dimmed in the slightest. “Unity” was chosen as an appropriate theme for the event, with St.Ange stating that nothing promotes social cohesion more than festivals which all people contribute to. 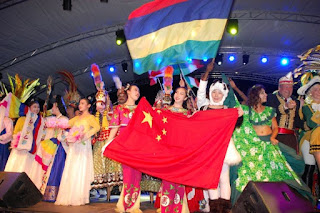 “Actually it’s the first year we’ve had a theme,” said Chief Executive of the Seychelles Tourism Board Sherin Naiken, “because before we used to keep it open for you to come and display your cultures. But this year the theme is unity.” She said that the theme was chosen to help locals forget about political divisions during the “heated election period” the country had just gone through and to maintain the past spirit of bringing nations and cultures together.

“Actually today it’s being called the ‘United Nations of Culture,’ and this is for a reason. It’s because nations have been rallying in the smallest capital in the world, Victoria, nations which you would never see sitting next to each other at United Nations meetings, but they rally side by side at our carnival in Victoria.”

The event lived up to its promise, with parties continuing late into the night and local musicians keeping everyone entertained. Even the capital’s trees were getting in on the act, with brightly colored materials hanging from them and nearby statues. Italians gave a tribute to Alice and Wonderland; Brazilians brought their samba flair; Zambians beat their drums; and a delegation from the Notting Hill group brought giant animal puppets, with a pelican, parrot, flamingo, and kingfisher soaring along the procession.

CARNIVAL FUELS THE ECONOMY THROUGH TOURISM

As always, the event carried a special significance for Seychelles beyond merely celebrating its culture and the culture of other nations. Tourism is vital to the island nation’s economy, and the annual carnival is an ideal opportunity to showcase what it has to offer to the rest of the world. It seems to have paid off. This year, so far, has seen an increase of 11% on the tourist numbers in 2015, which itself rose by 19% compared to 2014.

Giving a speech to visitors and locals at this year’s event, St.Ange was forthcoming about these wider benefits, “You have all realized that through your culture, you will find your soul, and through culture you will consolidate your respective tourist administrates.”

“You all know that through this carnival in the Seychelles you will get more visibility for your country than at any tourism trades fair we all religiously attend and at which we fight each other to get an interview with the press. We all know that the success of our respective tourism industries is dependent on how visible we are, because it is visibility that keeps us relevant in the highly competitive world of tourism.”

Thankfully, with so many sparkling dresses and vivid colors on show, the event attracts lots of attention and should continue to do so for many years to come.