Cash only! What foreign tourists should expect in Greece

Foreign governments are urgently asking their citizend visiting Greece to bring cash. Long lines at often empty ATM’s and a forced bank holiday on Monday along with fellow EU countries no longer funding Greece is a deadly mix.

Forget credit cards. There many rumors about capital controls next week so merchants are asking clients for cash, as returns from credit cards won’t be readily available.

Perhaps forget the slogan of the Greek Tourism board about no crisis in the travel and tourism industry in this country. 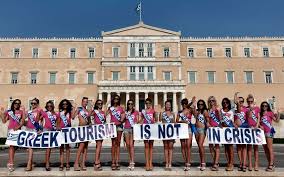 On the Acropolis hill, hundreds of tourists braved the Greek sun as they walked toward the Parthenon temple, pausing in awe at the ancient marble ruin, many of them oblivious to the different kind of ruin threatening modern Greece.

But Greece’s tense referendum on July 5 about the economic policies that creditors want, which could potentially push the country into bankruptcy and out of the euro, may well catch up with tourists in coming days. ATMs are running dry and many businesses are no longer accepting credit cards. Foreign visitors who find themselves unable to pay for services or meals may even had to cut short their vacations, just as Greece’s vital summer tourism season gets into full swing.

Tourism is one of the main sources of earnings for the debt-ravaged economy, directly contributing last year €17 billion ($19 billion), or 9% of Greece’s gross domestic product, from hotel bookings and up to €45 billion in indirect benefits from spending in shops, restaurants, tourist sites and elsewhere, according to the Association of Greek Tourist Businesses.

In addition the uncertainty of the recent months has affected the liquidity of Greek tourism enterprises because their partners, foreign tour operators, do not pay on time.