The end of the Tunisia tourism industry unfolding?

Did terror win over tourism? This is the feeling by members of the travel and tourism industry in this beautiful North African country, Tunisia.

Did terror win over tourism? This is the feeling by members of the travel and tourism industry in this beautiful North African country, Tunisia.

Local media reports are heart breaking – and locals are doing everything in their power to make tourist comfortable, even if it means to assist them to leave the country.

In the meantime hundreds of Tunisians have held a vigil for the victims of a brutal terrorist attack on the beach resort of Sousse. 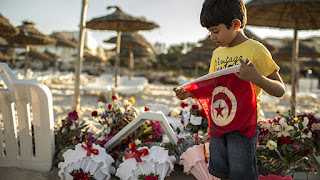 There’s a steady stream of tourists in the Enfidha airport on the day after the attacks, taking flights back to Manchester, Munich, Prague and any number of other European cities.

Christelle Waterlot, 47, had come to Sousse with Clément, her 12 year-old nephew. Asked whether her impression of Tunisia had changed, Christelle didn’t hesitate: “not at all.” She and her son were headed home early as her travel agency had forced its clients to leave Tunisia today.
“If I had the choice, she said,“I would have stayed.”

Though some were previously scheduled to leave today, many are leaving ahead of schedule, scared off following the brutal beachside massacre, which so far has left 39 dead.

Many European airlines chartered planes to the airport specifically designed to rescue the estimated 2800 tourists fleeing Tunisia the day following the massacre.

The demand for safe passage was such that one budget airline filled their entire daily schedule with optional repatriation fights.

One British tourist who gave her name only as Shallina, was more than happy to make good use of the airline’s free repatriation scheme.

On vacation with her husband and three kids, all aged under 12, she cut her two-week vacation short by 10 days because of fears for her children’s safety. “I don’t feel safe with my kids,” she told Tunisia Live. “I probably wouldn’t consider coming back while the country is like this.”

George Sturt, 22, and Chelsea Sinclair, 21, a young couple from London were similarly spooked by the mid-afternoon attack, which has since been claimed by ISIS militants.

Saying he would “definitely not” come back to Tunisia, George expressed frustration with the Tunisian security forces, describing their response as “a bit lax” and lambasting the poor co-ordination of the operation on the ground.

As to whether he noticed a significant change in security presence in attack’simmediate aftermath, George: “Probably about the same, to be honest.”

However his partner was far more scathing in her criticism of the Tunisian armed forces.

“One police officer came in and that was it, they went straight back out.”

“There was no extra security, you could even walk from the beach where the attack happened into the hotel with no problems.

“I don’t think it was as secure as it could have been.” she added.
Standing outside the lobby of the Palm Marina, a beach resort just over from the Imperial

Marhaba, Piet and Bernadette Bosman, a couple from Holland in their 60’s, were supposed to leave on Tuesday.
This is their tenth time in Tunisia and prior to the attack the couple were regular faces in Port El Kantoaui. “It doesn’t feel safe anymore and our children are very worried.”

“We were very near the attack so our family in Holland are concerned and they want us to come back.

In the wake of the Bardo Museum attack, tourism industry experts predicted a decline of 7% ahead of this year’s peak summer season. But many fear that yesterday’s attack could have far more long-lasting effects on the tourism field.

Paul and Allison, a couple from England, are staying at the Palm Marina. They were waiting outside the gates of the Imperial Marhaba, trying to get information about when they’d be able to get home.

When I asked why they were leaving,Paul told Tunisia Live: “We don’t feel safe here. “We had to run for our lives when the attack happened, we were terrified and now we just want to get home.”

However, not everyone is willing to walk out on Tunisia so quickly and many were quick to point out parallels between the attack in Sousse and Friday’s events in France and Kuwait.