Visit to the City of the Kings called Bulawayo

Even for me, an arguably widely-traveled individual, who reads up on destinations before embarking on journeys of discovery, my visit to Zimbabwe’s second largest city, Bulawayo, aka the City of the

Even for me, an arguably widely-traveled individual, who reads up on destinations before embarking on journeys of discovery, my visit to Zimbabwe’s second largest city, Bulawayo, aka the City of the Kings, came with some serious eyeopeners. Presently traveling with a group of journalists and tour operators, all of whom had attended the just-concluded Sanganai Tourism Expo in Harare, courtesy of the Zimbabwe Tourism Authority, site visits to hotels and lodges in and near Bulawayo were arranged.

To be honest, the last thing I expected to find was anything which I could categorize as an architectural treasure or a hidden gem, but hey, it goes to show that no one is infallible, no one knows it all, and that there is always more to be learned when traveling the world. Ever heard or read of Nesbitt Castle? Well today you will as I intend to share my own surprise, if not an outright dropped jaw, after visiting this castle in the air brought down to Terra Firma.

Opened in 1990 as a boutique hotel with only 10 suites, the castle itself is considerably older. It was one Thomas Albert Edward Garde, who was later to become known as Thomas Holdengarde, who, over a period of nearly thirty years starting around 1910, built his dream castle, and apparently without any architectural drawings, but also without plumbing and electricity. His wife Maude, or so the story is told, used one of his business-related absences to install electric lighting in the sprawling fortress, but indoor plumbing was only added after Thomas had passed in 1948. Maude and the rest of the family continued to live in what must have been the only English castle in the whole of Zimbabwe but certainly in Matabeleland before eventually moving away and leaving the estate sliding into disrepair.

Fast forward to 1988 when one Digby Nesbitt, together with his friend John Osborne, bought the property with the aim to renovate it and turn it into a fancied five-star hotel. Little did the two know what was in store for them, but like Holdengarde, they too displayed a fair amount of stubborn insistence and resilience and eventually, after spending a few tons of money, reopened the castle under its new name Nesbitt Castle, now a five-star luxury hotel.

After being given the red carpet tour by General Manager Amy-Leigh Rudolph, I counted myself lucky not to have gotten lost in the maze of nooks and crannies, narrow corridors ending in sharp turns, staircases up and down, precisely as one might imagine a castle in England or Scotland, except for the ghosts, of course.

In fact, when I return, I will make it my mission to hunt for ghosts, looking for double walls, hidden rooms, dungeons deep below, trap doors and secret passages and not to forget to also check under the bed, in the wardrobes, and behind the shower curtains. Perhaps, when the word ghost is mentioned, more people will drop their reluctance to come and visit Zimbabwe and who knows, professional ghost hunters may yet discover the real thing.

Attention to detail in the furnishings of the suites, each with a different color scheme and a different theme, show the level of attention the owners gave to implementing their dream and turning it into reality.

Today, this must be Bulawayo’s most fancied hotel, sitting pretty amid extensive gardens and on arrival having, no doubt in my mind about that, guests stare at the structure with their mouths wide open, before the initial shock gives way to a pleasant surprise. 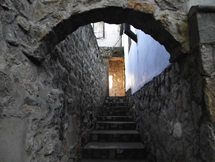 Outside and inside the building, guests find an array of tidbits, collections, and artifacts, collected no doubt over many years and displayed to add that genuine castle touch and the sense of yesteryear to the impressions visitors take home with them. Most striking is Nesbitt’s act as Knight in Shining Armour, which no doubt inspires the sense of security in any damsel displaying signs of any distress, or their male companions for whom the word bravery and chivalry may be a lost concept. 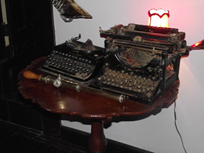 Add to this the reportedly excellent food served in the Coach House Restaurant, and I must rely on TripAdvisor reviews read, not personally experienced – something I intend to rectify at a future return to Zimbabwe – and one gets a competitively-priced package at a castle in today’s Zimbabwe, where few would think this possible. Ranked as Bulawayo’s best restaurant is the Coach House – a place for good wine, fine dining, and silver service – while the ground-level Dragon’s Den offers more informal settings and what can best be described as Pub Grub, a choice of hearty snacks and meals taken with a pint. Clearly it is possible and tourists, as the next chapter will further confirm, do have some great choices of locations and accommodation, belying what is often suggested in the global media about this country. 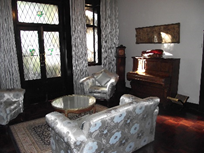 Enter part two of eye-opening revelations in the wider Bulawayo area. Some forty kilometers outside the city, located inside a UNESCO World Heritage site area, is what literature describes as a “Wilderness of Granite.”

Huge, no, massively huge bolders of granite rock make for some amazing formations, and nestled right in the middle of it sits the Amalinda Camp, a very luxurious safari camp which measures up to the best seen elsewhere.

Artfully blended and inserted into the rising rocks are 6 rooms and 3 suites awaiting guests who make the effort to get away from the maddening crowds and seek out open spaces and places where they can still experience nature pure. Many of the walls actually are pure rock face, and under thatched roofs some luxurious accommodation can be found, all with ensuite bathrooms and some with outdoor showers, entirely private and not overlooked by anyone but birds. All the materials used are local and their colors, of course, make a perfect fit when combined with the rock formations. Several small lounges offer resting places when the huffing and puffing is getting to be too much, as guests go up and down the boulders along small paths and steep stairs hewn into the rock. 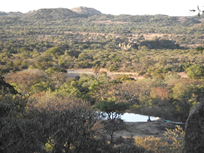 The Matobo National Park is known for the large concentration of leopard and also for its rhinos, and apart from game drives, many visitors partake in rhino trekking. Cave paintings are also found in the park, a reminder of how our human forbearers lived in days long gone, sharing the landscapes with big game, which in those days was more populous than humankind. Guests are either doing the conventional 4×4 safari with open-top landcruisers or else are going hiking with the guides and rangers to track rhinos and learn some bushcraft like reading spoors. 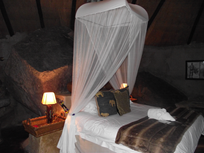 Going by what has been heard and seen, there are nowadays tourists few and far between from overseas and those who bucked the trend and signed up for a Zimbabwe safari, or a combined Zimbabwe and Zambia, or Botswana or Namibia or Mozambique safari will not regret the choice they made.

Key urban centers and safari parks are connected from Harare by air and road, and from several days’ experience, these main roads are in decent shape, with potholes fixed and making it reasonably comfortable inside a safari 4×4 or minivan to travel by road across the country. One thing is for certain, visitors are safe in Zimbabwe, and whether traveling individually or in a tour group, they will meet friendly faces and a warm welcome wherever they go.

It is obvious that Zimbabwe wants their former tourism arrival share in the wider region back and is going out of the way to accomplish that. Parks, hotels, and safari camps seen so far would suggest that the quality of accommodation is there, combined with some spectacular sites and monuments like the Great Zimbabwe Ruins – the largest pre-colonial structures ever built in sub Saharan Africa. It is a country with a great history and many stories to tell, just waiting for the tourists to be back to have enough people to tell those stories to.

South African President Ramaphosa  today updated his people on the State of the Nation in regards to the ongoing COVID-10 pandemic: He said: My fellow ... Read More