It looks like after a bomb has attacked. A French cathedral, a major tourism, religious and cultural attraction in the Nantes region, is on fire.

It looks like after a bomb has attacked. A French cathedral, a major tourism, religious and cultural attraction in the Nantes region, is on fire. It’s not known if the anyone is injured and how many visitors were inside the cathedral when the fire broke out.

Currently the fire department is trying to get the blaze under control.

Basilique Saint-Donatien-et-Saint-Rogatien cathedral is inmense with a rich architecture inside housing the tombs of the last duke of Brittany François II and his wife Marguerite de Foix. This tomb in marbre that sculptor Michel Colombe took five years to do between 1502-1507,is decorated with 12 apostles and four woman representing force, prudence, temperament, and justice. It was installed in the Cathedral in 1817. 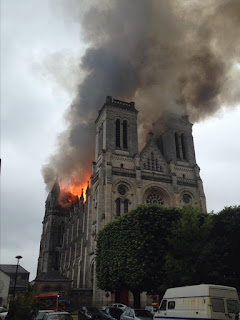 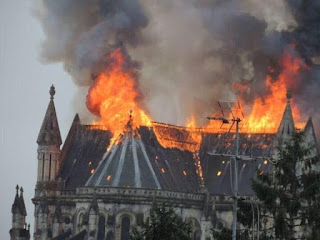 It, also, housed the tomb of général de Lamoricière, monument built in 1878 to pay hommage to his papal services for the native of Nantes.

The leyend of the Cathedral takes back to the 3C with the arrival of Saint Clair, first bishop of the city of Nantes who came from Rome in possesion of a nail that told was coming from the cross of Saint Peter or Saint Pierre. Saint Clair had built a chapel to house the relic and he dedicated it to Saint Pierre and Saint Paul. Historically there is a trace of this chapel of prayer on the west of the city on the hills of Saint-Similien.